Brooklyn’s East Flatbush neighborhood is an expansive grid of commercial avenues and residential streets dominated by single-family homes constructed in the 1920s and 30s. Nestled within this spread of detached and semi-detached residences was the Bethany Methodist Home, which has stood on East 40th Street since the 1910s and had long served as emergency shelter for women with limited resources. Unfortunately, it has steadily fallen into a state of disrepair and is currently abandoned. Grayson Jordan, a certified Passive House consultant and principal at Paul A. Castrucci Architects, described what remains as “a hodgepodge of several structures”.

Demolition of the existing structure is slated to begin this spring, and in its place will rise Bethany Terraces, a project that will consist of 39,200 square feet of new sustainable affordable independent housing for seniors. In addition to bringing 58 units of much-needed affordable senior housing to Brooklyn, Bethany Terraces is also a blue-ribbon award-winner from the second round of the Buildings of Excellence competition. The competition, which is sponsored by the New York State Energy Research & Development Authority (NYSERDA), awards funding to projects that can demonstrate achievable low-carbon performance; be easily replicated and broadly adopted; can provide financial benefits to owners; and will increase the health, safety, and comfort of occupants. Designed by Paul A. Castrucci Architects, Bethany Terraces checks each one of those boxes with gusto due to a combination of Passive House methodologies and modular design.

Jordan’s firm and the developer of the site, Riseboro Community Partnerships, are no strangers to creating low-energy buildings. Both have worked on several Passive House projects, including new construction and retrofits. At Bethany Terraces, the team will be trying modular construction for the first time, something Jordan believes will prove to be “a very replicable model”. “We’re seeing more and more things become prefabricated and trying to lean more into offsite construction,” he says.

Modular construction goes a step further into prefabricated or offsite construction than panelization, which relies on assembling prefabricated panels onsite and has been key to many well-known Passive House projects, including the Cornell Tower in New York City. For Bethany Terraces, each factory-constructed module will consist of a 9,000-cubic foot box (measuring 16 x 15 x 10 feet) that is essentially an entire apartment unit. The boxes arrive at the site with their four walls, floors, and ceilings already put together and with the finishes and windows also already installed. As much as 20% of the total insulation R-value for the walls is contained in batt insulation in stud walls, and the air and water barriers are already installed. The boxes are then stacked using cranes.

Once in place, the crew tapes the air barrier into place, while the site general contractor (GC) seals between the modules and adds additional insulation systems. To ensure a continuous insulation plane around the entire façade, the GC will install a layer of graphite-infused polystyrene along with the exterior insulation and finish systems (EIFS). The roof insulation and membrane are also installed onsite, as is all the continuous below-grade wall and underslab insulation. Once everything has been installed, the crew can then concentrate on the interior of the building.

“We think that this is the way the construction industry is going in general,” Jordan says.

The Benefits of Modular Design

There are some limitations in modular design, to be sure. The most significant one concerns the lack of flexibility and the need to adhere to a manufacturer’s product line. A single manufacturer must be chosen relatively early on during the design phase, and this can limit the building’s design.

As onsite workers are laying the foundation for the project, the modules are simultaneously being constructed in the factory. Once the foundation is complete, the modules can be delivered to the site and stacked up in as little as two weeks, according to Jordan. At this point, 80% of the construction from the ground floor up is finished.

Furthermore, modular construction can reduce costs, mostly thanks to reaping the benefits of an efficient workforce. As the manufacture of the modules occurs in a factory setting under the same conditions from day to day, the crew inevitably learns how to construct them more efficiently, in less time, and with fewer mistakes. Additionally, because crews are working in a controlled, indoor environment, this means no weather-related risks, no days that are lost to storms, and no miscellaneous surprises on the jobsite.

Modular construction also leads to cost savings by driving down the number of hours spent by crews on the construction site. Labor costs on senior housing projects in New York City are significantly higher than other types of projects due to prevailing wage labor regulations that do not apply to other types of housing. This can dramatically increase construction costs, according to Jordan. With more labor hours spent in the factory, where labor rates are lower, the total cost of the project comes down.

Finally, modular construction allows for greater quality control and the kind of consistency that arises when you industrialize a process—in this case building a module. This level of control becomes especially important when a team is pursuing Passive House certification for a project and monitoring each and every envelope penetration.

In addition to pursuing PHIUS+ 2018 certification, Bethany Terraces will also be fully electrified. To address the issue of domestic hot water, which continues to be a major cost driver on multifamily projects of this scale, they have devised an innovative solution by situating the building’s hot water tanks directly underneath the condensers for the rooftop heat pumps. With this arrangement the waste heat generated by the condensers can efficiently be transferred to the water storage tanks. The roof is also outfitted with a roughly 130-kW rooftop PV array that is expected to cover more than 100% of the common use electricity and approximately 80% of the entire energy use for the building.

The team has also prioritized using design to enhance the quality of life for the residents. While all Passive House buildings consider the health and wellness of occupants by providing them with a consistent supply of fresh conditioned air, Bethany Terraces will also help its senior occupants by improving wayfinding using a color-coding scheme throughout the property and promoting social connections while tacitly motivating residents to maintain an active lifestyle. Southern terraces will lead down to a large common garden that sits adjacent to the building lobby. This design helps to form a circuit linking a variety of outdoor spaces that encourage socialization, activity, leisure, and exposure to sunlight throughout the year. To support integration with the surrounding neighborhood, individuals from the community will have some access to the building’s community facilities. These will include a greenhouse and test kitchen where residents and the public can learn about the importance of nutrition and develop a few new tricks in the kitchen.

These prosocial designs go beyond just making Bethany Terraces a nice place to live. Isolation and loneliness can have a negative impact on mental health and researchers have found a particularly strong link between loneliness and dementia among people over the age of 55. Writing in an article published in Neurology in February 2022, a team of researchers based at New York University observed a three-fold increase in risk of dementia among study participants who were lonely and under the age of 80, even for those who would otherwise have a limited risk of dementia based on genetic risk factors and age. While there are several other factors that could mediate this connection, this is just the latest example of research that has found that the stresses associated with loneliness can have deleterious and permanent effects on one’s mental health. It is also a problem that conscientious design can help remedy.

Many of the features of the project are still relatively novel, and many developers will continue to be hesitant to try them out for the foreseeable future. Rising costs of labor and materials, not to mention supply chain disruptions, consistently play a major role in pressuring developers and designers to play it safe. However, with the proper incentives, designers are afforded greater latitude to think outside of the box as they explore new solutions and innovations, and grants from programs like the Buildings of Excellence competition can go a long way in encouraging new ideas. According to Jordan, the grant “really takes the sting off doing something like the hot water heater”.

He compares this developer conservatism to the chicken or the egg paradox. In order for market forces to push costs down and make scalability possible, first adopters are needed. However, if potential first adopters don’t recognize any worthwhile incentives to taking a plunge, they’ll remain on the sidelines until another firm does. If no one absorbs the risks of first adoption and no outside force takes the initiative to push the market, nothing changes. NYSERDA is serving as that outside force in an industry that is notoriously hostile to change.

“NYSERDA’s an incredible partner, and they’re really pushing the ideas of sustainability at scale,” Jordan says. “The idea of Buildings of Excellence isn’t just, ‘You did a nice project.’ It’s, ‘You did something that we can all learn from and do over and over,’ and that’s really critical.” 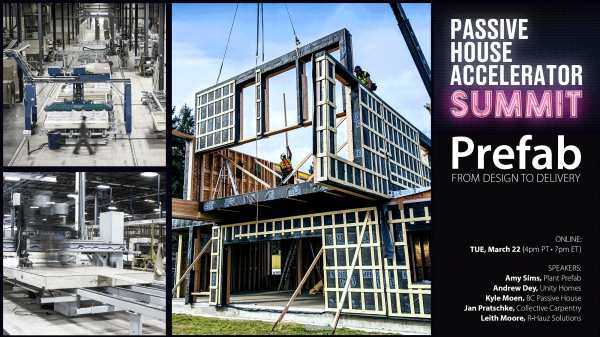 Passive Prefab: From Design to Delivery 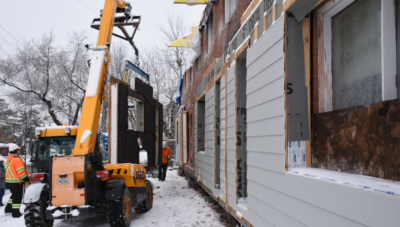