When completed in early 2023, Winthrop Center will bring over 1.8 million gross square feet of residential, office, and retail space to Boston. At 691 feet, it will also be the tallest skyscraper in the Financial District and stand just blocks from the new 678-foot tower being built atop the city’s South Station complex. While the two may draw comparisons because of their heights, developer Millennium Partners Boston (MP Boston) anticipates that Winthrop Center will be recognized not only as a new peak along the city’s skyline, but as a beacon of building excellence and environmental sustainability.

Winthrop Center at a Glance

The through-block area that makes up the ground floors of the Winthrop Center will serve as a public extension of nearby Winthrop Square and the surrounding urban landscape. Known as the Connector, this arcade will not only contain amenities for the building’s occupants, but also provide a home for year-round cultural programming and regular rotating educational, collaborative, and civic events. Rising above the Connector will be 812,000 square feet of Class A office space, along with 510,000 square feet of residential space housing 317 condos.

Certification from both the Passive House Institute and the International WELL Building Institute will be sought for the office space, which, if successful, will put the project on the path to being the largest Passive House office building in the world and the only project at this scale to achieve WELL Gold. While the residential portion of the project will be LEED Gold certified, the office component will be LEED Platinum certified. According to MP Boston, energy models indicate that other LEED Platinum buildings in Boston use 60% more energy than the office space in Winthrop Center is forecasted to, and a typical Class A building in Boston’s existing stock uses 150% more energy.

Construction started in 2018 and did experience some delays due to the pandemic, but the first occupants are scheduled to move in at the end of Q1 2023. Among the new tenants will be Cambridge Associates, who will move their global headquarters to Winthrop Center and occupy 115,000 square feet of space. This planned relocation is in keeping with Cambridge Associates’ recent announcement that they are setting emission-reduction targets for their operations.

“While our work in sustainable and impact investing is valued by a large portion of our clients, it is essential that our commitment to sustainability shows up beyond investment portfolios and within the walls of our firm as well,” says David Druley, Cambridge Associates' chief executive officer. “We will be able to meet our own significant commitments to sustainability and carbon reduction thanks to Winthrop Center’s approach to responsible, resourceful, and renewable office space.”

Close to The Edge

Since MP Boston began planning this project approximately six years ago, there has been a push to create what Brad Mahoney, director of sustainable development at MP Boston, describes as an exemplar of the next generation of buildings. Mahoney said that their starting point was to build in a way that aligned with the principles shared by people and organizations that view the climate crisis as an existential threat. Additionally, Mahoney said they wanted to create a building that could become a “talent magnet” in its own right.

This is not an entirely novel concept, and Mahoney notes that MP Boston was heavily influenced by office buildings like The Edge in Amsterdam, which was heralded as the most sustainable office building in the world when it was completed in 2014, and has attracted such notable global firms as Deloitte, the law firm AKD, and Sandvik. The MP Boston team even went to the Netherlands to tour the building and to learn what had made it so immensely popular.

In addition to The Edge’s remarkable sustainability, the team from MP Boston also realized that human health and wellbeing had been central to its design. Workspaces are more flexible and afford opportunities for more dynamic experiences and the use of internet-of-things technology to monitor ambient temperature, daylight, CO2 levels, and other data points gives occupants the ability to create an optimal working environment. Dubbed “the smartest building on the planet” by Bloomberg in 2015, working within The Edge has become a draw in itself.

In its efforts to optimize the Winthrop Center, MP Boston has consulted extensively with John Fernandez, a professor of architecture at the Massachusetts Institute of Technology and founder and principal of the Environmental Solutions Initiative. Fernandez has produced a strong body of research that supports the notion that the kinds of technologies and design elements pioneered by buildings like The Edge can have a positive effect on people’s mental and physical health. He has also supported MP Boston’s desire to pursue Passive House certification, as the firms’ two talent-attracting criteria—creating a more sustainable and a healthier building—are both satisfied when one builds to Passive House standards.

Handel Architects, the project architect renowned for their social transformative and environmentally conscious design, advocated in the early design stages for integrating Passive House into the project. Handel and Steven Winter Associates, the energy consultants for Winthrop Center, had recently finished constructing the then-tallest Passive House building in the world—The House at Cornel Tech’s Roosevelt Island campus—and brought their expertise on the benefits of Passive House and how to apply it to the project. The team was joined by Suffolk Construction, which is managing construction services on the project. Additionally, MP Boston traveled to Germany and met with representatives from the Passive House Institute who provided guidance on the extremely ambitious project and agreed to use it as a pilot project.

While there is no doubt that Passive House design is growing in popularity throughout North America, particularly in the residential market, interest among commercial developers has struggled to catch fire. Developers are notoriously squeamish about new technologies, especially if they seem extravagant or supererogatory. Indeed, the $1.35 billion price tag attached to this project is steep, but MP Boston believes that the investment in the downtown property will ultimately pay off, given the benefits of Passive House. Once the building is open for business, the MP Boston team expects—and hopes—that other developers will follow suit.

Designing, assembling, and maintaining a massive and airtight building envelope that features a lot of high-performance glazing is expensive—and makes for a very desirable workspace. Flooded with natural light, the office portion of Winthrop Center contains 12-foot ceilings and 10-foot windows to supply abundant light on all floors. To achieve the high level of airtightness necessary for certification, the team is installing a unitized curtain wall system manufactured by SotaWall known as the THERMO-3. The system is largely transparent but very well insulated and contains thermal breaks between the exterior walls. It is triple-paned and has a U-value of 0.22 for the vision glass and an R-value of 18 for the opaque portion of the wall system.

The mechanicals, meanwhile, include four ERVs manufactured by TMi for each floor, water-cooled chillers manufactured by Arctic Cool, and horizontal fan coil units manufactured by Williams that have been outfitted with MERV 13 filters. Mahoney notes that the end result is “30 to 50 percent more fresh air than comparable buildings.”

In keeping with the project’s commitment to staying operationally carbon neutral, Mahoney says that all electricity will come from offsite renewable sources and the office space uses limited natural gas for heating purposes. The project will purchase carbon offsets for this limited natural gas usage. Unfortunately, an onsite PV array was determined to be unfeasible.

The tower-on-podium design of the building signifies a clear break between the residential space and the office space, with the top of the podium serving as a planted roof terrace. This level is also home to a collection of amenities for both the residents above and the office tenants below, known as The Collective. Below is the mid-level mechanical equipment floor.

In addition to being different in area, the layouts of the office section and the residential section are also notably different even if they both follow a similar T-shape layout. The office floors have open floor plans that span for 45 feet with few columns and supporting walls, thereby providing better lines of sight to windows. The residential units contain more columns and follow a more conventional layout.

To separate the two and support the weight of the residential columns, Suffolk Construction and subcontractor S&F Concrete Contractors poured a 20-million-pound slab of concrete almost 350 feet off the ground that had to be kept in place for 21 days in the fall of 2021. This “transfer mat” transfers the weight of the additional residential columns contained in the tower to the perimeter columns in the podium below, and from there to the ground. It also serves as the envelope for the portion of the building being certified by the Passive House Institute.

MP Boston hopes that the success of the project will not only win them accolades from people who are interested in sustainability. They also hope to raise the bar for the entire industry.

“The climate crisis is here,” Mahoney says. “So how do you create leadership?”

Mahoney believes it’s by taking positions that challenge the wisdom of the status quo. Even if these decisions may at first seem quixotic, successful outcomes can push the market in directions that make what was business as usual just a few years ago seem archaic. “It’s a big undertaking, but it’s well worth it,” he says.

Mahoney says. “The tenant base is fully embracing this,” he adds, “because we’re walking hand in hand with them in that shared vision of sustainability.” 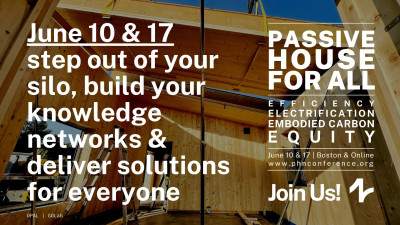 To Live and Certify in Somerville 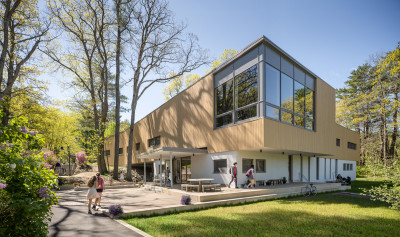