Designing for tomorrow’s housing needs today means finding innovative ways to improve the construction industry’s productivity, which will be essential to addressing the current housing crisis. While prefabrication has long been seen as promising, this solution still has not reached the tipping point for mass adoption. Waymark Architecture’s experience with the Sugar Cube house, a custom-designed single-family Passive House on Vancouver Island, shows that prefabrication’s time may have finally arrived. Combining Passive House with prefabrication enabled us to deliver a resilient, future-proof house in an infill lot with less onsite labor needed in a time of a skilled labor shortage—a win-win-win for the contractor, clients, their neighbors, and the city.

The clients contacted us, because they wanted to downsize from their existing heritage home in Victoria, British Columbia and build a smaller home on the newly subdivided lot in their backyard where a shed used to be. This move would allow them to leave a beautiful, but high-maintenance, heritage house, which was also an energy hog, for a new, low-maintenance home that was a more appropriate size for them as empty-nesters, all while staying in the neighborhood they loved. Another key benefit they were after was predicable energy costs, making their financial retirement planning much easier.

From the beginning Passive House certification was set as the goal, and this intention helped win over the city during the approval process. The city’s councilors and staff recognize that infill housing is key—when it’s built well—to addressing the growing need for housing. By designing to the Passive House standard, the design team ensured that the new home is a high-quality and sustainable building that adds to the neighborhood.

The newly created small lot lent itself to an ideal form for both energy performance and cost: a cube. Aesthetic and practical considerations led to the design team putting a ‘hat’ on top of the cube to be the roof. The interior of the house is relatively open across two stories, with a brightly lit staircase on the south-east corner as its central, eye-catching feature. It is a modest-sized house, but carefully placed windows, an efficient layout, and lots of light coming through the stairwell will make the finished space feel generous. During presentations to the city, the design team was able to clearly communicate how design decisions can help achieve—or not—Passive House requirements.

Prefabrication was the next big choice the clients faced—and for them it was an easy one. The clients realized they did not want to have a site that would be in construction for any longer than was necessary, nor did they want to bear the financial burden of owning both their original home and a home under construction for a long period. Choosing prefabrication as the method of construction meant an overall easier process in which much of the work was done off-site in a controlled environment and then assembled in a few days once the foundation was constructed. Finding a prefabricator that could use its standardized process to work with a customized design was essential to the overall success of this project, and we were fortunate to have found Collective Carpentry. The exact same house could have been built on site, but using prefabricated panels took months off the construction schedule.

Designing for both Passive House and prefabrication had a considerable impact on our design focus and the site preparation. While prefabrication streamlines the bulk of the construction, it does require significantly more coordination and teamwork between the architect, builder, prefabricator, and subtrades. A detailed shop drawing process had to be undertaken, where each piece of wood and each piece of structural hardware in each panel was 3D modeled, coordinated with the structural engineering requirements, window and door openings, and major penetrations through the envelope like the HRV intake and exhaust.

An area of particular concern in our high-seismic risk zone was the connection between the panels, which were acting as the shear walls, and of course air-sealing the seams between panels. Fortunately, Collective Carpentry’s approach was compatible with the engineering requirements, and, after a collaborative and thorough review with the structural engineers, the seismic requirements were met.

For us, the shop drawing process was not perfect, which perhaps shouldn’t have been surprising, given that it was our extended team’s first go-round. The HRV duct runs were not fully resolved when the prefabricated panel shop drawings were approved, which required the exhaust duct penetration to be relocated. This hitch in the coordination was unfortunate, but not insurmountable.

The general contractor (GC), Interactive Construction, is an experienced Passive House builder, but had never worked with prefabricated panels before. Russ Barry, the owner of Interactive Construction, was really pleased when he realized that the Passive House requirements that his crew are used to having to pay attention to had been mostly handled already by Collective Carpentry. This is a big take-away, as prefabrication has the potential to scale up adoption of the Passive House standard substantially by requiring fewer changes of GCs.

Prefabrication was not expected to be a lower-cost option than a conventional, fully site-built home. However, a happy prefabrication surprise was that, during all of the wild cost escalations and material supply chain challenges of building during the Covid-19 pandemic, the costs of the prefabricated components of this build escalated less, and probably ended up on-par with site-built costs. Additionally, in a time of skilled labor shortages, the prefabrication not only was faster, but also helped maintain a more predicable schedule.

What did the prefabrication include? The foundation was constructed with conventional concrete walls on spread footings, creating an unconditioned storage space in the basement. The wood floor directly over the concrete basement walls was also built on site. Doing it this way allowed for backfilling all around the house, permitting cranes to maneuver to deliver the wall and roof panels where they needed to go. These panels provided all the structure and envelope, including airtightness layers, insulation, weather barrier, and strapping. The panels were flat-packed, much like IKEA furniture, and fit onto two transport trucks. The first truck arrived on a Monday, and the roof was on and all panels were in place by Thursday.

The buildup of Collective Carpentry’s wall panels starts with typical structural 2x6 framing with plywood sheathing, with all seams taped to be the airtightness layer. Outbound of that are I-joists, which create a cavity for dense-pack cellulose insulation, held in by a weather barrier membrane (WRB) on the outside. Strapping is also installed in the prefab shop, as it protects the WRB during shipping. The final cladding is installed on site and not part of the prefabricated assembly, allowing the same range of choices as there always are. The Interior stud space is also left void. This is done to allow for panel attachments, mostly with structural screws.

The roof assembly is made using two layers of prefabricated panels; the first is for the insulated assembly, and the second, much thinner layer creates the overhang and vent space. A service cavity drop ceiling is site-built after the panels are in place.

Air sealing at the joints must be thought through, as the airtightness layer becomes inaccessible once the panels are in place. Gaskets and sealants are used as the panels come together. The mid-construction blower door test comfortably passed at 0.45 ACH50.

After the prefabricated panels are all in place, the rest of the build happens quite conventionally; electricians and plumbers have access to the stud cavity in the usual way, so no specialist knowledge is required.

This team is convinced that the benefits of prefabrication outweigh the challenges, particularly in the case of this infill housing project, and we feel that prefabrication has the potential to accelerate the adoption of high-performance building where there may be reluctance. During this time of an unprecedented labor shortage, prefabrication requires fewer on-site work hours—a big advantage—along with a faster and more predictable construction schedule. The early effort required for coordination, ideally with HVAC, plumbing, and other trades involvement, is a challenge, however.  Waymark Architecture will continue to leverage the benefits of prefabrication and Passive House. We see the combination as an effective tool to improve productivity in the industry, which will be an important tool to address the housing crisis.

Sarah is an IT-director-turned-managing-director with over 13 years of experience managing people in the IT industry. Bringing these skills...

Graeme is a founding principal of Waymark Architecture and a keen advocate for advanced building science. He is one of the first architects... 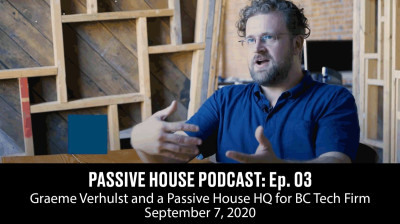 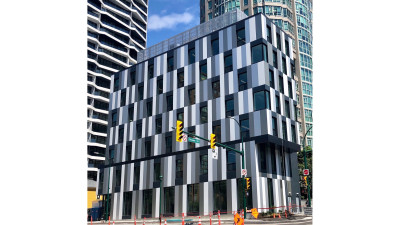 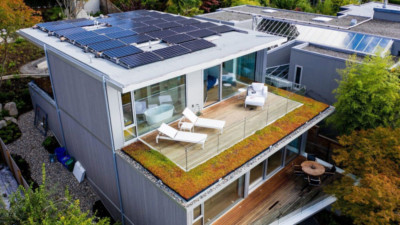