When architects turn their attention to the exterior wall of any building they are designing, the most important consideration is the cladding they choose. Will it effectively protect the building—and those inside the structure—from the elements of wind, rain, snow, cold, and heat? Will it provide a reliable moisture barrier? In addition, will it do all of this consistently over the life of the structure?

Rainscreens as external cladding have been around for decades, but advancements in technology have made them increasingly popular in conventional and high-performance construction. This is due to two key factors—their ability to deliver optimal performance metrics, and the flexibility they provide when it comes to design options.

How do you define a rainscreen? What are its components, and what can it deliver when it is specified for the exterior wall of a building? According to Wikipedia, a rainscreen is “an exterior wall detail where the siding (wall cladding) stands off from the moisture-resistant surface of an air barrier applied to the sheathing (sheeting) to create a capillary break and to allow drainage and evaporation. The rainscreen is the siding itself but the term rainscreen implies a system of building.”

For additional context, consider Madeleine Rousseau’s account of a controversy over the difference between a drained cavity wall and a rainscreen wall back in 1990 (1). “Now a heated debate on terminology usually starts!” she noted. “Usually, the debate cools off when the expression ‘pressure-equalized’ is used.” Rousseau went on to illustrate a compartmented wall with a 115mm-cast concrete air barrier behind each compartment.

Architects rarely choose cast concrete as an air barrier today. Moreover, pressure equalization has lost favor as a means of controlling bulk water intrusion. At the same time, many historical definitions of rainscreen walls have stood the test of time. GK Garden’s influential 1963 article remains relevant, providing guidance to modern exterior wall design. “Rain penetration results from a combination of water on a wall, openings that permit its passage and forces to drive or draw it inwards,” noted Garden. “It can be prevented by eliminating any one of these three conditions” (2).

Garden regarded pressure equalization as a means of controlling the forces that drive or draw liquid water. In his analysis, both water on the wall and openings that permit water’s passage would always be present.

The construction industry has witnessed plenty of change since Garden and Rousseau conducted their research. Today’s construction environment is much more complex. Architects, specifiers, and designers have a wider variety of materials to source, and pressures to stay on budget, use less carbon-intensive materials, and pursue more rigorous efficiency standards for projects of all sizes have intensified. Add in the substantial advances in building enclosure design, and key stakeholders are dealing with an ever-evolving paradigm.

Arguably, the most significant innovation has been the widespread use of continuous air barrier systems. Rather than focusing on pressure equalization, an air barrier system “is a system of building assemblies within the building enclosure designed, installed and integrated in such a manner as to stop the uncontrolled flow of air into and out of the building enclosure” (3). This addresses one of Garden’s three conditions (openings that permit passage of water) and controls a factor Garden did not describe. Air moving through a wall assembly brings water with it in the form of humidity, leading to potential condensation and a number of undesirable consequences. Now required by code, an effective air barrier system is fundamental to every wall design and crucial to projects pursuing Passive House certification.

Two of Garden’s forces involve capillarity. Wikipedia defines capillary action as “the ability of a liquid to flow in narrow spaces without the assistance of, or even in opposition to, external forces like gravity.” It is commonly called wicking and can be seen in an oil lamp where oil is drawn by capillary action up the wick to the burning tip. Madeleine Rousseau’s 115-mm concrete air barrier, which was porous by nature and prone to cracking over time, was also vulnerable to moisture entry by capillary action. This was controlled with an air space or cavity, which created a capillary break. In this way, water was managed using an exterior rainscreen (the brick façade), a capillary break (the air space) and weeps that allowed moisture to exit from the wall. Garden’s forces were managed.

Masonry walls of this kind represent an extreme condition in both retrofits and new construction. Bricks and mortar can store large amounts of water, and concrete is porous and hydrophilic, making it highly conducive to capillary water flow. As a result of this and other considerations, the air space in this wall design must be between 1” and 6 5/8” wide, though spaces less than 2” are not recommended (4). More recent materials such as OSB sheathing also allow capillary movement of water (see Figure #1) and are more prone to moisture damage than cement.

This takes us back to the heated controversy over cavity wall and rainscreen wall terminology, without pressure equalization to stop the debate. Clearly, any wall design that carries the “rainscreen” designation must have a gap between the outer rainscreen and a drainage plane. In most cases, the moisture barrier within the drainage plane will also function as an air barrier assembly, continuously connected to the roof, foundation, window, and penetration air barrier assemblies. While a gap is an absolute necessity, how large must this gap be?

The answer to this key question is specific to every wall design, because the gap is called upon to perform different functions. For example, all the materials used in  exterior insulation finishing systems (EIFS) have very low moisture absorption. Provision for drying absorbed water is therefore less critical. Air circulation within the gap, which is sometimes associated with rainscreen terminology, is not necessary with EIFS. What is required is a gap that establishes an effective drainage plane. For this, a one-mm gap has been shown to be effective (6)(7). While larger gaps are sometimes used, they have not been shown to provide improved drainage performance (6)(8). Utilizing a one-to-three-mm gap to allow gravity to drain moisture out along a defined drainage plane, EIFS with a fluid-applied air and moisture barrier is consistent with the principles laid out by Kirby Garden and has proven itself to be effective, both in testing and in real-world service.

On the other hand, stucco has substantially higher moisture absorption than EIFS and is often applied over building wraps. This creates a greater potential for capillary water movement and the need for more comprehensive moisture control strategies. Introduction of a 3/8” drainage mat between stucco and the water-resistive barrier within a stucco wall system has been shown to greatly reduce the incidence of moisture damage (9). Drainage mat products are often marketed as “rainscreens.” These products create a capillary break between stucco and building wraps, which is consistent with rainscreen principles. By comparison, stucco directly applied to masonry is clearly not a rainscreen wall.

Ventilated and open-joint wall systems make a further use of the air gap. By creating a convective loop outside of exterior insulation, the wall assembly dries itself continuously (See Figure #2). The vast majority of water is shed by the outer rainscreen siding. Air circulation provides a means where moisture that has entered the wall (perhaps through open cladding joints) can exit. Behind insulation, an air and moisture barrier provides a second capillary break and an additional line of defense against moisture entry. Sometimes referred to as “true” rainscreen walls, ventilated and open-joint rainscreen walls make full use of Garden’s rainscreen principles.

The Importance of Proper Insulation

When critical building functions depend on effective performance of a single material or assembly (a sealant joint, for example), performance is directly affected by failure to install, install correctly, or maintain that assembly. The redundancy of moisture control combined with the passive nature of convective drying are what make ventilated rainscreen wall systems so effective. Most water is stopped by the primary rainscreen. Water that enters the cavity between the exterior insulation and the rainscreen exits by evaporation within the convective loop. Finally, an air and moisture barrier behind exterior insulation provides an additional line of defense.

There is less reliance on sealants in ventilated rainscreen walls. Where sealants are used, they are often shielded from UV exposure. This layered, redundant approach to air, moisture, and thermal management has shown itself to be highly effective.

Introduction of insulation into the wall cavity adds a further consideration regarding air gap size. Air gaps within a wall system open potential pathways for fire propagation that must be carefully evaluated. This is the case whether insulation within the gap is combustible or noncombustible. Given the complexity of flame propagation, large-scale system testing performed per NFPA 285 or CAN/ULC S134 is needed to establish fire safety. Buildings that employ wall systems tested per NFPA 285 have demonstrated good performance in real-world fire situations (10). However, both NFPA 285 and CAN/ULC S134 are system tests. Any changes in the wall system, including changes in the size of the air gap, affect fire performance and require expert consideration.

Whether a project is designed to achieve Passive House level of performance or not, all components of a wall system must work in concert to manage air, moisture, thermal, mechanical, and fire performance. The system must also have the appropriate aesthetic appeal and perform at a cost that a given project can bear. Further, architects are legally required to produce designs that meet building code requirements, and the general contractor is legally required to construct buildings that meet code requirements. Those seeking third-party building certifications must also meet rigorous performance goals. This can be a daunting prospect for both the architect and the general contractor given the array of fire, moisture-resistance, and mechanical requirements placed on exterior wall systems. Fortunately, there is an immediately available solution to all these challenges.

Such a system is liberating for everyone involved. Architects can focus on attaining desired aesthetic, performance, and cost objectives. General contractors can reduce risk by employing proven installation practices. Applicators can typically access focused technical expertise from the building product manufacturer if installation questions arise.

Integration as a Driver

Ultimately, the multiple pressures and changing mandates in today’s construction environment require a change in thinking, one that aims at taking a systemic approach to the external wall.

Put another way, it’s not just about protection from the elements.

As Wikipedia noted, the term rainscreen implies a system of building. While at one time that system would have encompassed moisture control alone, the complexity of exterior wall systems now requires a more integrated approach. 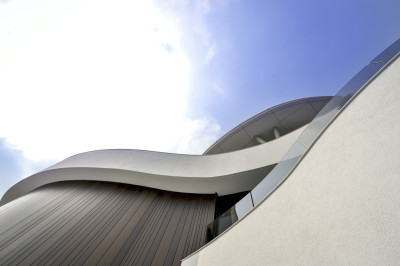 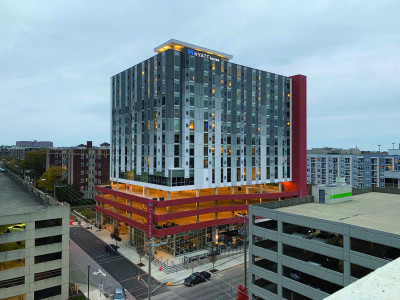 Industry Shift: The Acceleration of Panelization