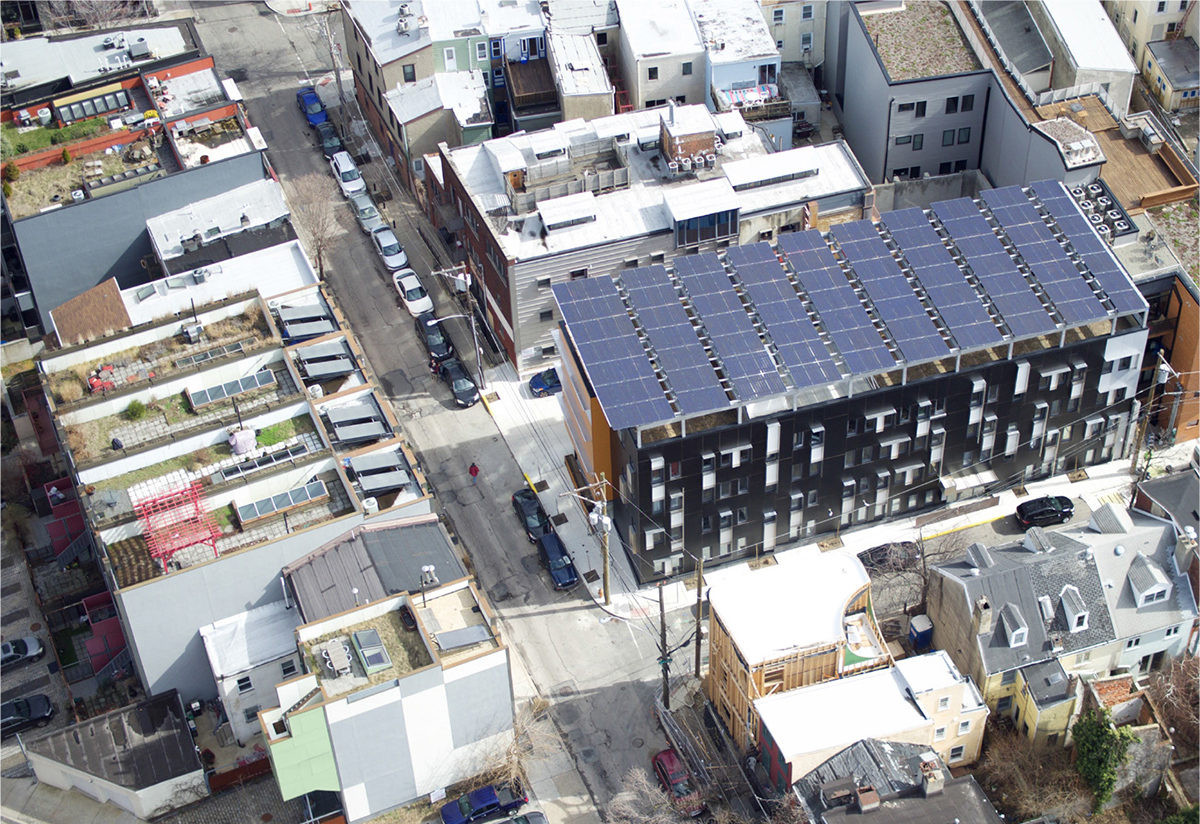 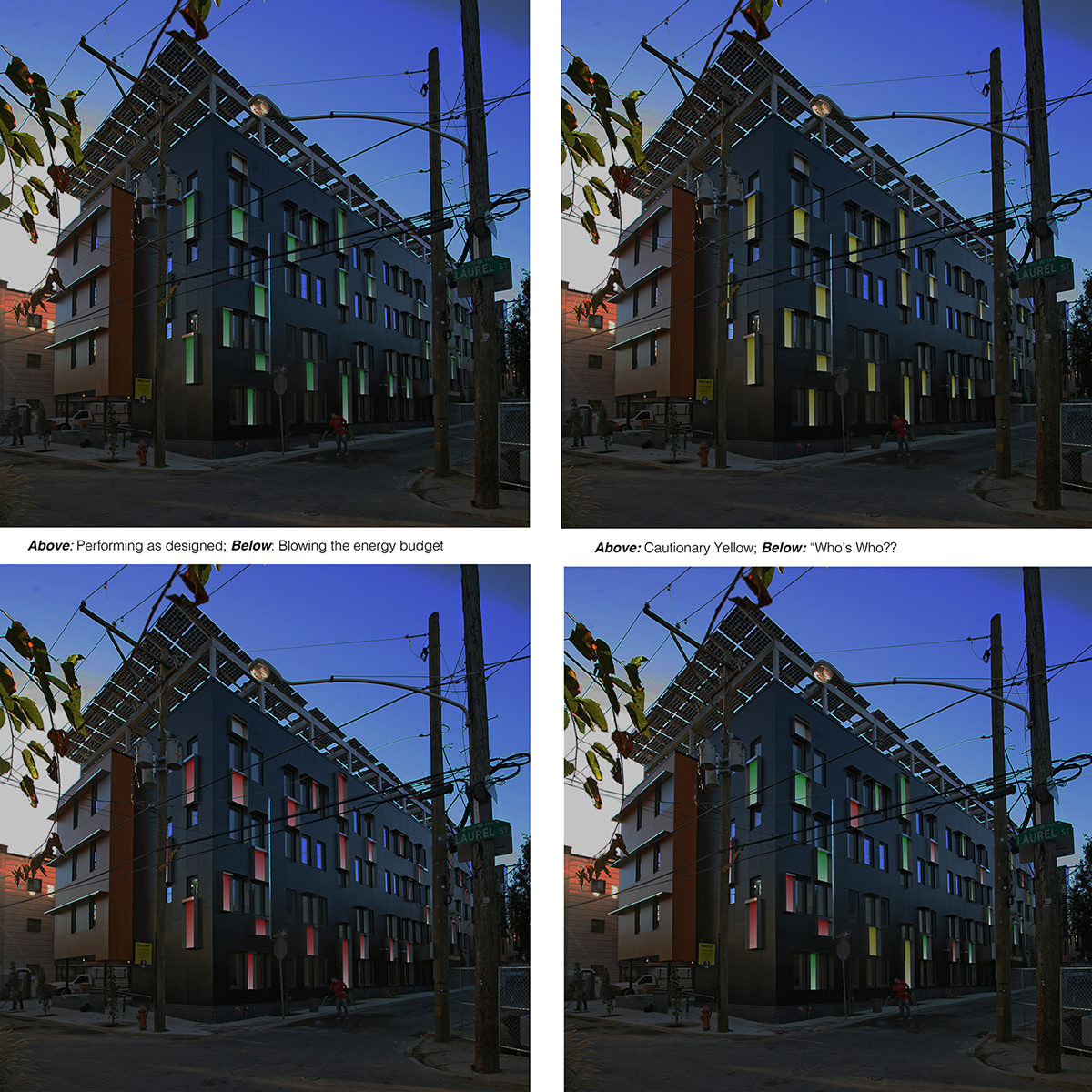 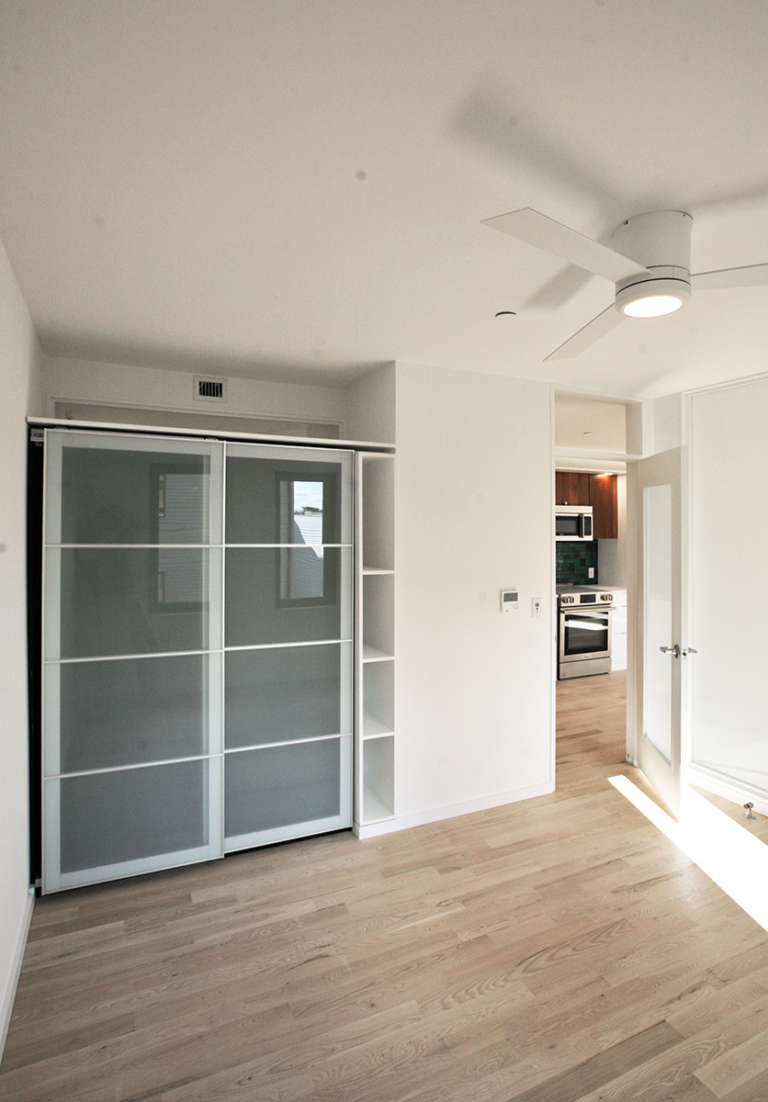 The Battery is the third phase in a 3-phase development called Capital Flats (CF), a 42 unit residential project built over an 18-year period in the Northern Liberties section of Philadelphia. CF is a unique form of “slow” development, designed and planned to be intentionally flexible and open to changing community and market needs. Each Phase of CF responded to an evolving set of neighborhood revitalization goals as well as economic, sustainable and developmental pressures unique to each period in Northern Liberties. Phase 1, The Factory, saw the retrofit of a former industrial meat packing plant into 8 hand-crafted apartments and promotes the first rule of sustainability: the most sustainable building is one that is already there. Phase 2, Thin Flats, became the FIRST LEED-H Platinum set of duplexes in the country and was honored with the 2010 ULI Global Award of Excellence. Phase 3, The Battery, completed in 2017, responds to two pressing local and global issues: 1. the need for attainable apartments below $1500/month + utilities, 2. the need for buildings (responsible for almost 50% of all greenhouse gas emissions) to zero-out their impact on global warming.

The need for attainable and sustainable market-rate housing in rapidly gentrifying neighborhoods in Philadelphia, remains one of the City’s most daunting challenges. Northern Liberties is one of those neighborhoods, now fully gentrified and increasingly more socially and economically homogenous. The Battery attempts to demonstrate how one re-balances that inequity by creating a four story, Net-Zero-Energy, PHIUS + Certified building (designed to consume 75% less energy than a similar code building), packed with 25 “micro-units”. This Philadelphia version of a micro-unit is a one bedroom, 500sf apartment, with an average rent of $1375/month, including all utilities. In order to achieve this level of density, affordability, and sustainability, the design capitalizes on density bonus incentives for an extensive green roof, uses geo-thermal heating, cooling and hot water to all apartments, has a super-insulated, pre-fabricated, thermal envelop with triple-pane windows, air-tight construction and a 77 kW photovoltaic canopy on the roof designed to generate all the energy the building requires annually.

The Battery is specifically designed as a scalable and replicable prototype of dense, urban multifamily housing. As such it is meant to demonstrate not only the imperative but also the financial feasibility of developing high-performance, net-zero, carbon-neutral and cost-effective housing to meet Philadelphia’s commitments to the COP21 Paris Climate Agreement. From a development perspective, the lender was interested solely in conventional expense/revenue metrics for financing, in other words, the project needed to be built within the cost parameters of conventional and comparable multi-family housing, and the rents needed to similarly match rents for comparable apartments in this area of the city. Built at a hard cost of $169/sf, and with rents BELOW market rate, The Battery raises the bar for sustainable and attainable housing and hopes to inspire developers in the City, State, Country and abroad that such a “lift” is possible.

Closing the gap for the development community between cost and performance is only half the challenge to making high-performance building standard practice. The other half requires both an awareness and commitment on the part of the inhabitants of the building and city to lower energy consumption. The Battery attempts to create a dialogue with the community in order to activate this awareness and interest. The façade of the building is designed to initiate such a dialogue. White panels on West and North facades are lit with LED lights which are connected to the energy monitoring system of the building and glow GREEN when the building is “performing” as planned, YELLOW as a cautionary warning and RED when tenants are blowing the energy budget. Individual panels can also demonstrate an individual apartment’s energy consumption but tenants are unaware of which panel is connected to which apartment. The result is a prototypical building that dynamically and somewhat subversively creates a competitive social consciousness around energy consumption within the building’s tenant community but also within the neighborhood community at large.