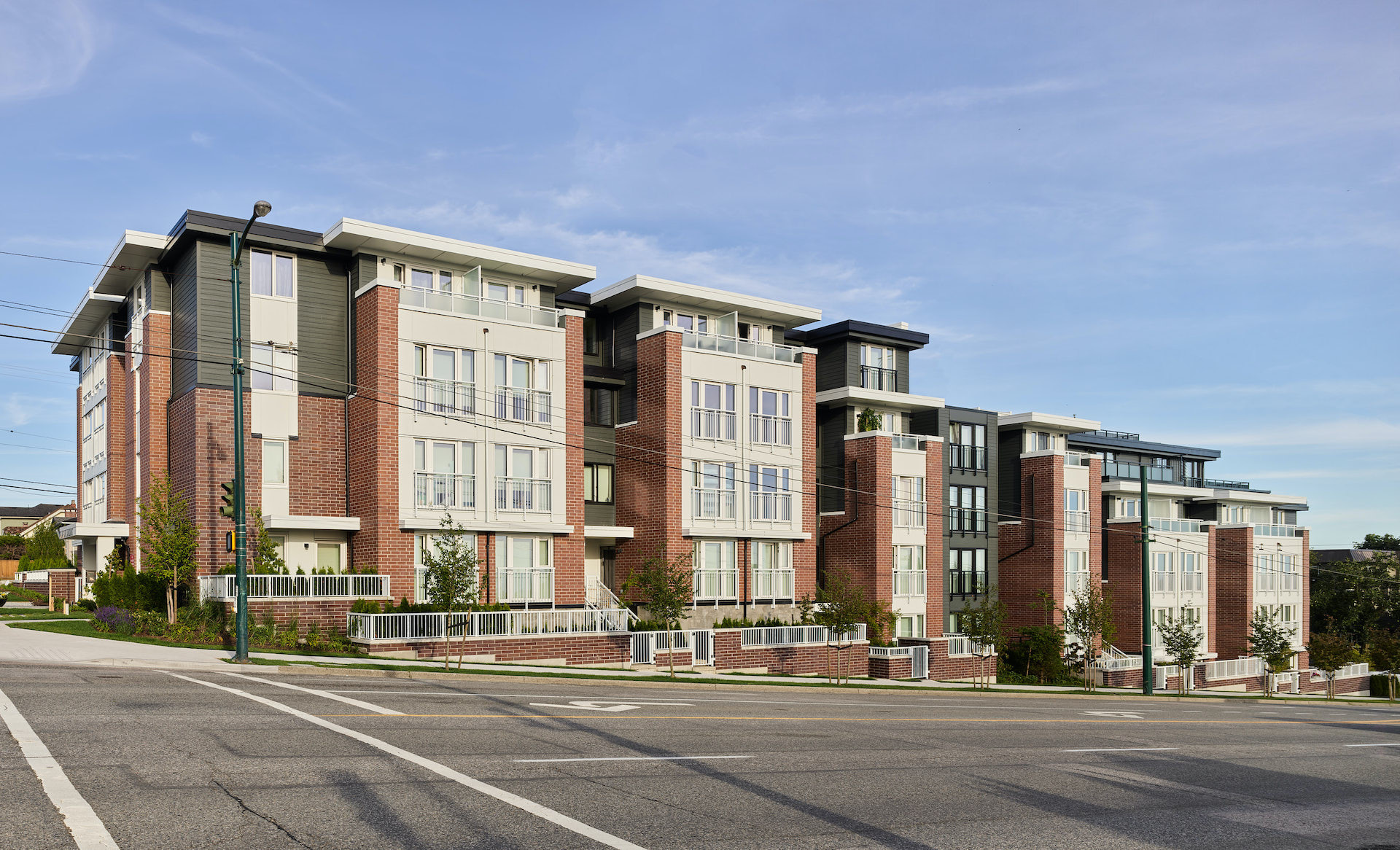 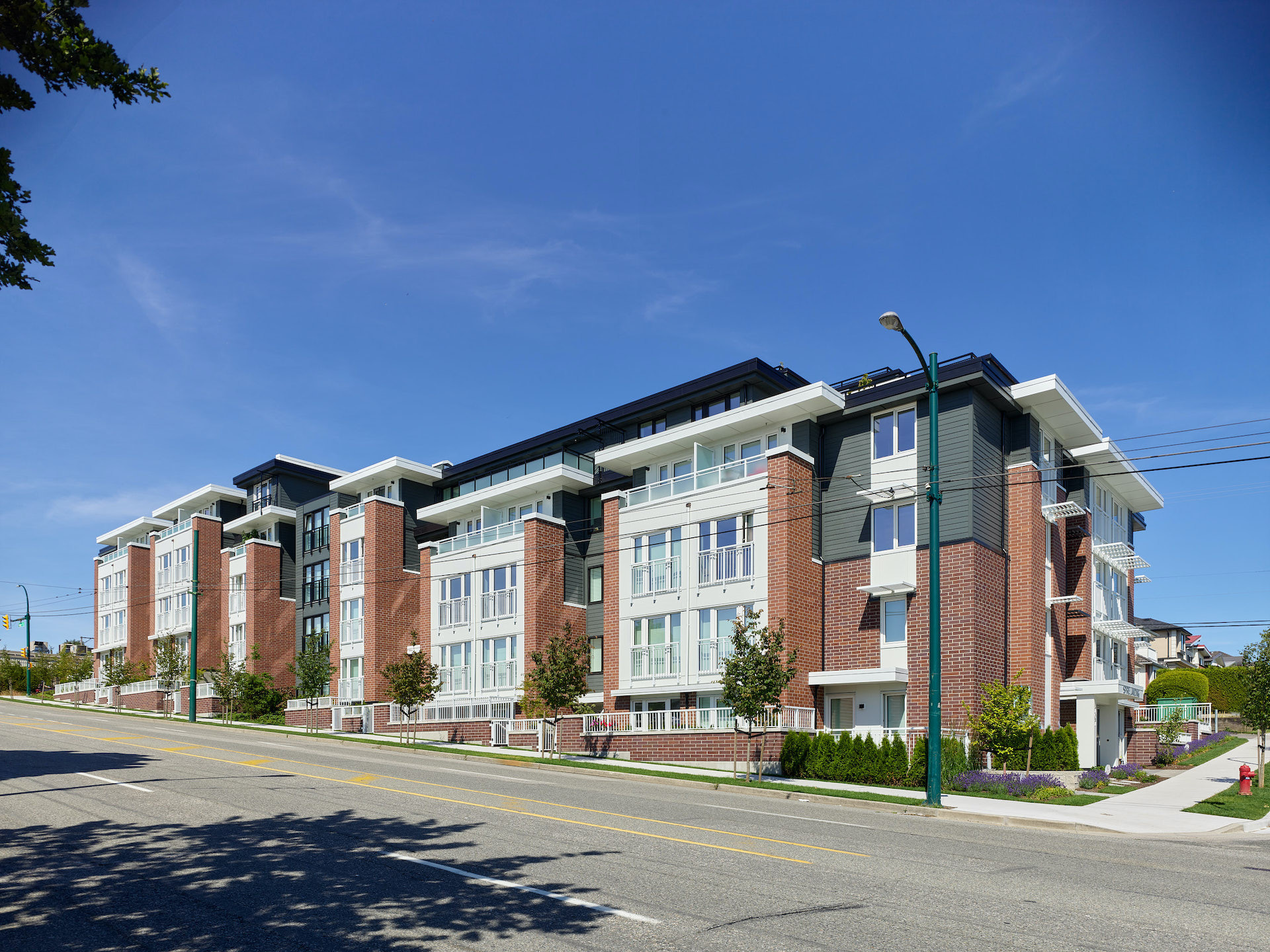 The project location is a site on the east side of the Fraser Street between 57th and 58th Avenues. The property has an area of 26,708 sf. (2,481.3 m2). The proposed development comprises of 95 rental units, plus common residents’ facilities and underground parking.

The design approach is to take advantage of the twenty feet of site slope by means of a stepped massing (with outdoor amenity uses on the intermediate roof areas). Further, the approach articulates the building street frontages with bay elements that reflect the scale of the surrounding houses, and in doing so, projects a townhouse-like character with an animated pedestrian edge. A response to the arterial traffic character of Fraser street is formed with the addition of major boulevard trees, the choice of durable materials and a mid- rise urban aesthetic.

The overall massing is a six-level development, stepped as noted in accordance with the site contours so as to present a predominantly four-storey scale as perceived from the ground. The fourth level is de- emphasized through additional setback and material/colour change to further reduce the apparent height scale. Laterally, the scale is mediated by the bays also noted above - a 36-foot module with a 24-foot wide bay separated by 12-foot wide recesses. This generally conforms to the (32ft to 43ft) pattern of house lots on the opposite side of the Fraser St. The expression of the bays is emphasized with brick-faced returns bracketing the main window groups. The Fraser Street elevation is modulated further with a centre massing break that takes the form of an increased setback to about 18-ft for the centre 28-ft frontage. This break is reinforced with a cladding selection that contrasts with bays, and through intensified landscaping and ground plane treatment.

Each ground level dwelling unit on the street sides has a front door (as well as internal access). This is executed by increasing the ground level setback in the recess between bays to get the access “behind” the living room. Low brick-faced garden walls run parallel to the public sidewalk to define the residents’ outdoor court; this wall is punctuated by metal gates aligning with the bay recesses to serve walkways leading to the individual front doors. Plantings on the outside of the garden walls will soften the pedestrian edge; plantings also serve to separate the space associated with each residence. Boulevard trees will be planted in the strip between the curb and sidewalk (as requested by the City).

On the rear (lane side), two-storey wings mediate the scale of the larger building in height and plan; these wings are of a similar height and scale as the adjacent houses Further, they complete the side street (ie. reduce the lane gap) in a manner comparable to RS-1 or RT-2 development, and mask the higher mass behind from the street view. Internally the wings accommodate the majority of the two-bedroom units. There is a five-foot lane setback, that is heavily landscaped, including sizable trees, for buffering and character. As seen from the street, the roof form comprises segmented flat projecting cantilevers. These serve as valuable rain protection for wall surfaces and upper decks, and also provide sun-shading where required. The subtle shadow effect works to recede the visual prominence of the upper storey. The intermediate roof areas provide usable outdoor amenity for the residents:

• on the upper most level a roof garden is proposed with a number of “rooms” suitable to a combination of children’s play and restorative use by adults; they are also suitable for a variety of growing settings from edible plantings to display landscape

• the upper level also provide the place for an amenity room, maximally separate from all apartments, that can alternatively serve as a quiet room, or as a booked space for music practice

• On the level below, a major south-facing terrace is proposed; it is connected to a large common lounge/activity room.

The design has a window wall ratio of approximately 30% - suitable for residential suite livability and consistent with energy-use targets. The exterior materials (rain-screen brick veneer and lapped cementicious panels) are selected for durability. The features outlined above, and the general character proposed including the colour palette, are intended ultimately to be contextual – while this is a building of larger scale, the design attitude is to make it compatible with the existing buildings, to reflect the general character of new Fraser street development further north, and to establish an easy-to-follow (or inflect) precedent for inevitable further development of the Fraser Street corridor.